The Raptors Return By Allison Kolynchuk 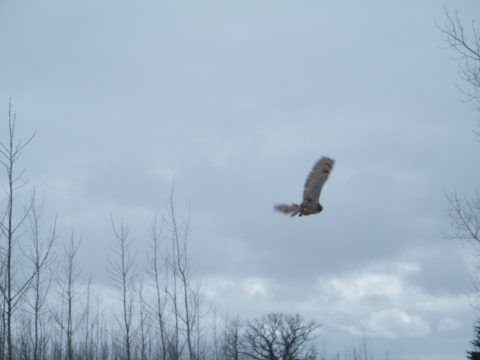 Heads up! Time to flock together with PWRC for a day at the annual La Rivière Raptor Festival. Come and see our educational booth set up on Apr. 21 from 10 a.m. to 4 p.m. in the Blair Morrison Hall.

This public event is a hub of activity for the who’s who of Manitoba birders. Guest speakers, guided walking tours, and a photo contest will be highlights of the day. An active tally is kept of all of the birds of prey seen by festival attendees.

Riverine corridors are commonly used by raptor species, including hawks, falcons, eagles, and owls as they return to spring breeding territories in the north. Raptors have chosen the Pembina Valley as a migration corridor because the forested slopes generate warm air currents, or “thermals”, that ascend to the valley’s precipice.

Migration can be energy draining, so the thermals are used by raptors to maintain their distinctive soaring flight patterns instead of continual wing beating. Wind direction determines in which area of the valley raptors will fly.

Raptors usually begin to fly over the valley around the third week of February and this migration continues until the third week of April, reaching its peak in early April. Some years, the festival has announced that more than 10,000 raptors of 13 species had been counted over the course of the spring migration season.

Throughout March and April, between 100 and 1,000 raptors can be seen flying overhead every day. The Pembina Valley provides the highest count of red-tailed hawks in North America. Other common sights include sharp-shinned hawks, northern harriers, Cooper’s hawks, American kestrels, and merlins. Occasional raptors sighted include turkey vultures, peregrine falcons, and bald and golden eagles. The golden eagle count in the Pembina Valley is the second highest in eastern North America.

It is a well-known tradition among birders in Manitoba that seeing the return of raptors to the Pembina Valley marks the beginning of the spring migration season. Come and celebrate migration with us at the La Rivière Raptor Festival!